TG4 are a very forward looking television network here in Ireland. They are the public service broadcaster for Irish-language speakers. TG4 had a plan to launch a new online player on their website and approached us to build a brand new app to coincide with the launch.

We sat down with TG4 to outline the goals of the project. We wanted to take advantage of the latest iOS features and add brilliant new features to make it the best player in Ireland. 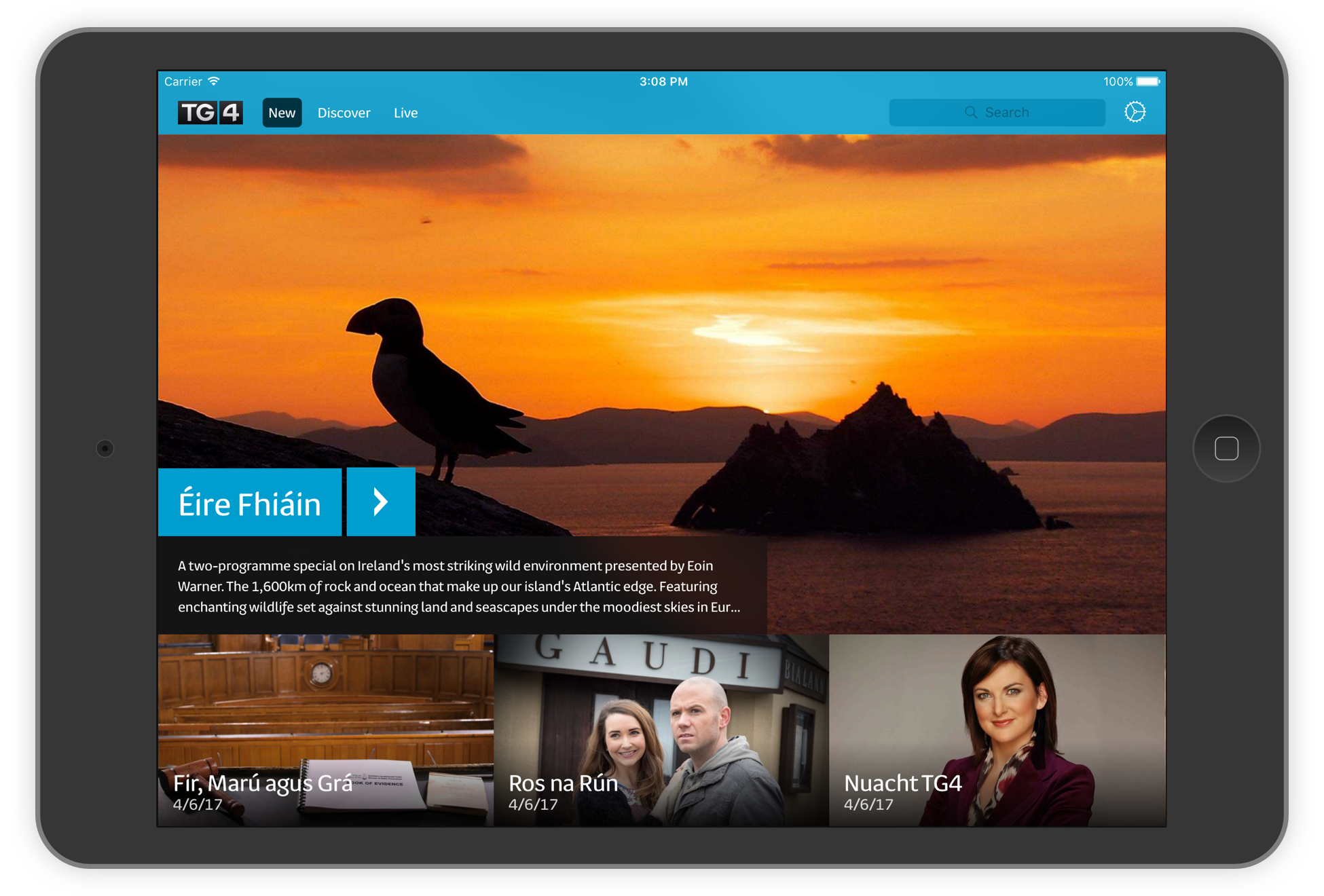 To make the best player app in Ireland. To do this we needed to start fresh. A brand new app that would support the latest devices, have chromecast output and on the fly language switching.

TG4 gave us the autonomy to expand on the initial brief and we proposed a number of additional featured that they loved.

We met with the team at TG4 to outline their requirements, understand their viewers and bring our own ideas.

While the majority of their viewers speak Irish we wanted to make the player accessible to everyone. We decided to add support for multiple languages in the app. The only problem is the default system Apple provide requires you to close down the app and launch it again when you change language. This wasn’t good enough so we decided to roll our own. On the fly switching on languages, check.

The viewers also wanted Airplay support on the new app, so they could continue watching on their TV. We went a step further and proposed Chromecast support also, a first amongst the Irish player apps.

We love power users, so we proposed a few features for them too. Split screen support on iPads means users can watch TG4 while working away on another app. Great for watching the GAA in work! We also suggested 3D Touch support, which allows us to add quick shortcuts to different parts of the app from the home screen.

TG4 are brilliant to work with. Although having an idea of what they wanted they gave us free reign to come up with new concepts and propose them. 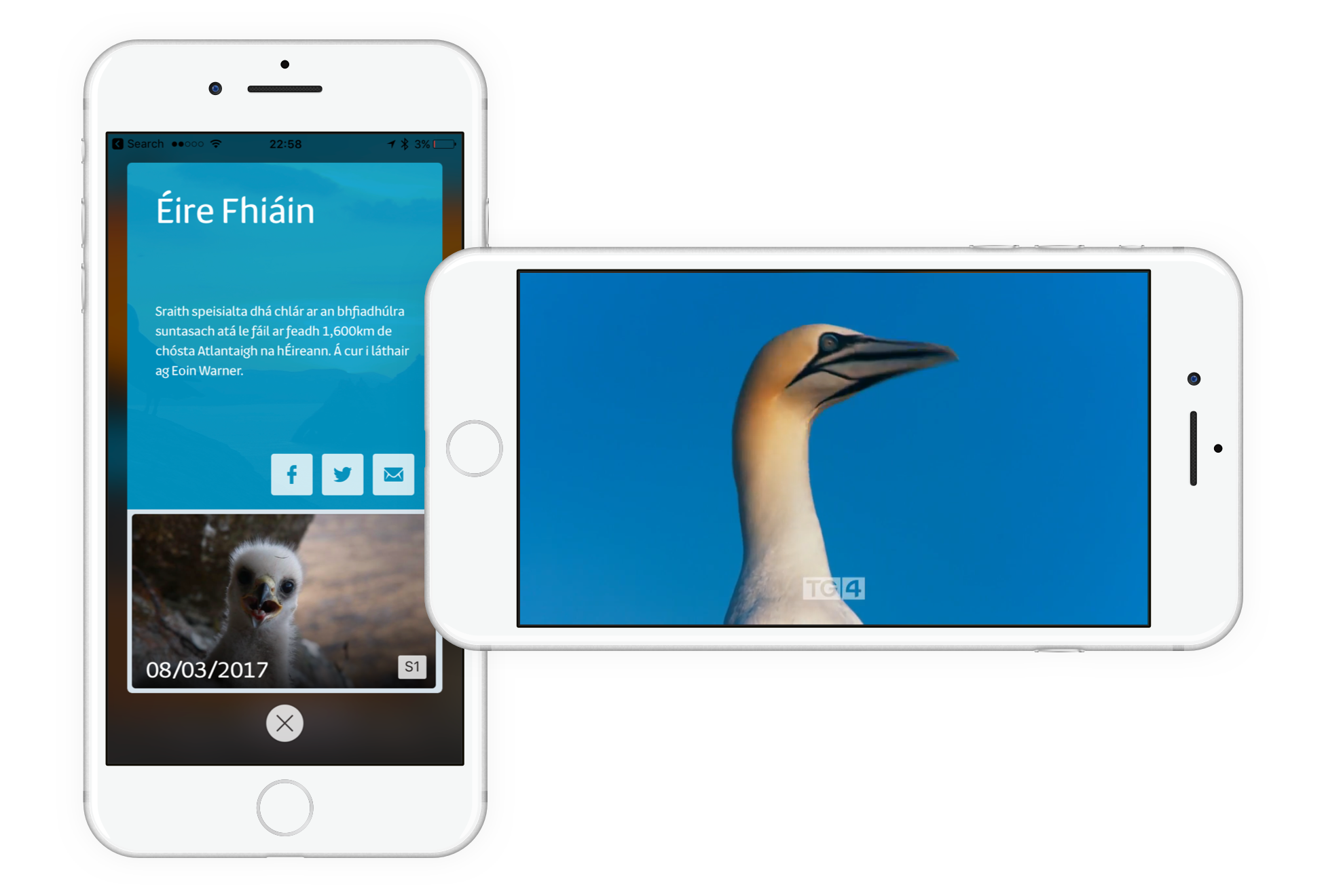 We designed the TG4 player be a fully universal app, meaning it works flawlessly on both iPad and iPhone. We outlined various reusable ‘blocks’ in our designs which would work brilliantly on both devices.

In the new TG4 player we wanted content to be king. We crafted a beautiful tile design which puts the artwork up front and centre. With a section up top for featured content and a smaller section below for the latest programmes.

We designed the search functionality to closely resemble the home screen so that we wouldn’t break the flow and again letting the content do the talking.

The video player screen keeps the controls out of the way until the user needs them. We added in quick controls for casting to a Chromecast, Airplaying and choosing subtitles.

A key feature of the app was the new subtitle support. Previously TG4 had burnt the subtitles onto each video directly meaning the user had no control over them. The new system would not only allow users to turn them on or off but also choose the language they would like displayed.

This opened up TG4’s shows to a much wider audience. It allowed non Irish speakers to understand and enjoy the programme. It also helped would be Irish language students improve their skills. Fluent Irish speakers can remove them full for an unrivalled viewing experience.

To do this we had build a custom implementation as the subtitles were stored on a separate server than the media provider. These were then combined on the device. This also meant we could ensure the subtitles worked dynamically for Chromecast and Airplay.

Another feature mentioned previously was the ability to change languages without turning off the device or even closing the app. Again this warranted a custom solution. It was important for us that we use the same localisation setup as with other iOS apps to ensure support and the ease of updating them in the future. This meant we would have to intercept the text from the translation files depending on the current user language selection.

Apple released a brand new feature called Split Screen just as we started development on the TG4 Player. It is always important to us that the app utilise all features of the iOS eco system that would benefit the end user. So of course we added support for Split Screen so users could enjoy TG4 while working away in another app.

"We have partnered with 8bytes on a few projects now with great success. From design, development through to implementation, we have found the team to be responsive, flexible and supportive. They have delivered apps that are visually engaging, intuitive to use and reflect the TG4 brand values. The 8bytes team have produced a quality product and they come highly recommended."